--(BUSINESS WIRE)--Aug. 20, 2020-- (NYSE: ENV) (the “Company”), a leading provider of intelligent systems for wealth management and financial wellness, announced today the closing of its offering of aggregate principal amount of 0.75% convertible notes due 2025 (the “Notes”), which were sold in a private offering to qualified institutional buyers pursuant to Rule 144A under the Securities Act of 1933, as amended (the “Securities Act”). The proceeds include the full exercise of the option to purchase additional Notes granted by the Company to the initial purchasers.

The Notes will mature on , unless earlier purchased, redeemed or converted. Interest accrues on the Notes at a rate of 0.75% per year and is payable semiannually, in arrears, on and of each year, beginning on .

The Company may redeem all or any portion of the Notes for cash, at its option, on or after , at a redemption price equal to 100% of the principal amount thereof, plus accrued and unpaid interest to, but excluding the redemption date, if the last reported sale price of the Company’s common stock has been at least 130% of the conversion price then in effect for at least 20 trading days (whether or not consecutive) during any 30 consecutive trading day period (including the last trading day of such period) ending on, and including, any of the five trading days immediately preceding the date on which the Company provides notice of redemption.

The Notes were offered to qualified institutional buyers pursuant to Rule 144A under the Securities Act. Neither the Notes nor the shares of the Company’s common stock into which the Notes are convertible have been, or will be, registered under the Securities Act or the securities laws of any other jurisdiction, and unless so registered, may not be offered or sold in except pursuant to an applicable exemption from such registration requirements.

The statements in this release relating to the expected use of proceeds from the offering are forward-looking statements made pursuant to the safe harbor provisions of the Private Securities Litigation Reform Act of 1995. These statements involve risks and uncertainties that could cause actual results to differ materially, including, but not limited to, the anticipated use of the proceeds of the offering, which could change as a result of market conditions or for other reasons, and the impact of general economic, industry or political conditions in or internationally. Factors that could cause such differences are described in the Company’s periodic filings with .

(NYSE:ENV) is transforming the way financial advice and wellness are delivered. Our mission is to empower advisors and financial service providers with innovative technology, solutions, and intelligence to make financial wellness a reality for everyone. Over 103,000 advisors and more than 4,900 companies including: 16 of the 20 largest banks, 46 of the 50 largest wealth management and brokerage firms, over 500 of the largest RIAs and hundreds of FinTech companies, leverage the platform to grow their business and client relationships.

Except for historical information and discussions, statements set forth throughout this web site may constitute forward-looking statements within the meaning of the Private Securities Litigation Reform Act of 1995 or other applicable laws. These statements involve a number of risks, uncertainties, and other factors that could cause actual results to differ materially, as discussed in the company's filings with the U.S. Securities and Exchange Commission.

Envestnet, Inc.'s financial performance is subject to risks and uncertainties, some of which are discussed in forward-looking statements contained in its reports filed with the U.S. Securities and Exchange Commission. Actual results may differ materially from those described in the forward-looking statements. The stock data above is presented for informational purposes only and is not intended for trading purposes. Stock information may be delayed and reflects stock splits. Historical investment performance is not an indication of future performance.

The information provided on the Investor Relations pages is hosted by a third party. Envestnet, Inc. does not control and is not responsible for any third party content and makes no representations as to the timeliness or accuracy of such content. 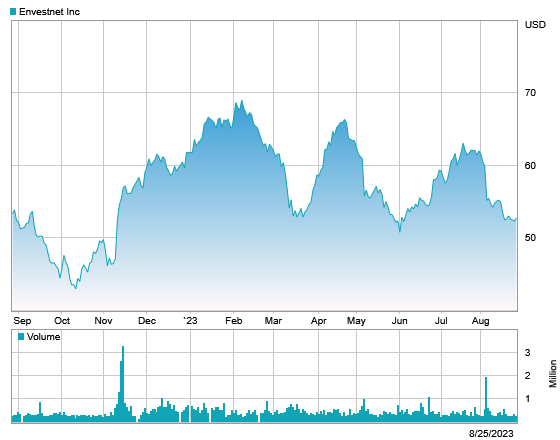